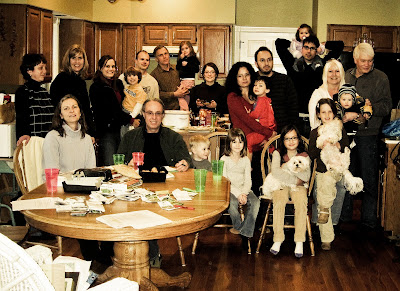 I hope everyone enjoyed last Saturday's gathering as much as I did. People brought all kinds of dishes, breads, smoked meats, goat cheese and roasted peppers - all homemade!. We even had some of the fingerling potatoes in our soup. But enjoying your company beat all that. I love introducing interesting people I know and love to other interesting people I know and love.
And the kids - can you believe it? I was sure at least one would require medical attention at some time. But, you could hardly tell they were here. And, they even picked up all their toys before they vanished.
Now for the garden news. On Stan's recommendation, I mailed soil samples to the U of Massachusetts this week. I've never had the soil tested by a lab, so I am really interested in the results. He also found the attached guide to choosing soil amendments. They caution against adding wood ash, which I thought was an elixir. And, they discourage adding sand to clay soils, which on the surface seems to make sense. But, it "creates a soil structure similar to concrete".
I also ordered 3 yards of soil/compost from Musselman's nursery. It arrives Monday, March 2nd. We'll have to move it from the top of the driveway to the small garden. So if you get frustrated during the day and wish to burn off some steam, drop by and grab a shovel.
During our get-togethers, most of the real learning about gardening comes from individual to individual discussions. I swapped seeds with Chantelle before everyone else arrived. Melissa gave me a packet of New Jersey Tea seeds - I'd unsuccessfully tried to locate this plant for years! (The seeds are cool in that they require you to condition them in 180 degree water before planting them in late winter. Who would have thought.) Stan, as always, was full of new and interesting ideas. Everyone was exposed to new ways to preserve and prepare food. I want to use these informal exchanges as the primary way to help one another.
As early as this Saturday, I might start some of the cold weather plants as seedlings. I'm thinking about the lettuces, kale, chard, spinach - those guys. Then, in a couple of weeks we can transplant them into the garden. I'm also interested in starting shrubs from cuttings. I want to do this every year, but I always miss the window of opportunity.
We'll need to start the warmer weather plants in a couple of weeks (tomatoes, tomatillos, peppers). That means we have to order any new seeds shortly. I am still very receptive to new ideas for these and other plants. I am afraid I discouraged everyone at the meeting in this regard.
Rebecca is part of a food co-op, and its members order plant material from a gardener called the "Chile Woman" in Bloomington. Her website is www.thechilewoman.com . Each plant is $3, which would be expensive for our 30+ pepper plants and 20+ tomato plants, for example. But, if you need a plant or two for a smaller garden, it sounds like a great choice. Rebecca can help you add to their order.
Posted by Roots and Vegetables at 2:33 PM

That is simply because lots of people drive over from a neighboring
state which does not permit the loan to find quick money in the Car Title Lending
State Payday loans various people get assistance from
the experts like financial planners, lawyers, investment
advisers and accountants.